As a general rule, when you’re plotting to have a story killed by a news organization, it’s best not to include the news organization in your email chain. Virginia gubernatorial candidate Terry McAuliffe’s team learned this the hard way when they discussed a story they wanted to “kill” and accidentally cc’d the reporter requesting comment.

It all started when a report broke that McAuliffe was hiring Marc Elias, a Hillary Clinton operative who specializes in stealing elections for Democrats. Paying him $60,000 was bad optics for a campaign that has been fading quickly due to an onslaught of electoral missteps by McAuliffe down the homestretch. Hiring Elias is an admission that the campaign believes they will lose, so when requests for comment started coming in, the campaign panicked.

According to Fox News [emphasis added]:

“There are a host of election lawyers but McAuliffe selected an attorney accused of lying to the media, advancing rejected conspiracy theories, and currently involved in a major federal investigation that has already led to the indictment of his former partner,” Turley wrote.

“McAuliffe may be preparing to challenge any win by Republican Glenn Youngkin,” he wrote on Twitter.

Fox News reached out to the McAuliffe campaign for comment on Turley’s suggestion. McAuliffe spoksperson Christina Freundlich responded to the email with a message apparently meant for colleagues, not for Fox News.

“Can we try to kill this,” Freundlich wrote. 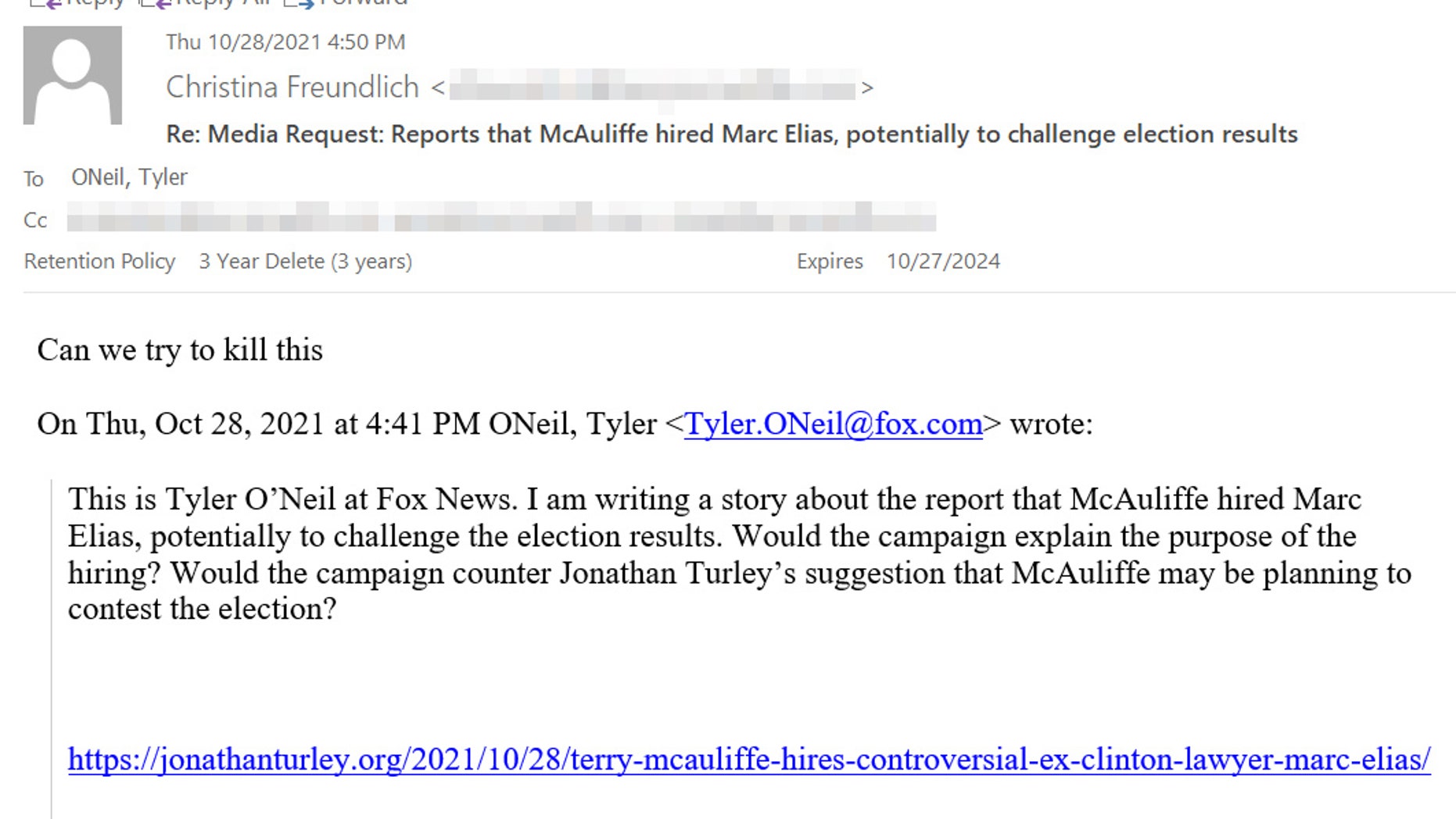 “To dispute the challenges of the election,” she clarified, ostensibly responding to an email that did not go through to Fox News.

The McAuliffe campaign did not give any response to Fox News on the record.

Both McAuliffe and his Republican opponent, Glenn Youngkin, have pledged to “absolutely” accept the results of the election once certified.

Yet Turley raised concerns because McAuliffe has embraced Stacey Abrams’ claims about the 2018 Georgia gubernatorial race.

Oops! If McAuliffe plans to accept the results of the race, why would he hire a man whose entire career has been built on challenging election results? Is he so concerned about a “stolen” election that he’s willing to challenge it in court? It seems that’s the case, and it seems his campaign is making critical mistakes in the final days of the campaign, just like their boss.

Virginia is considered a bellwether for the upcoming midterm elections. Democrats have been winning in the state in recent elections, including McAuliffe himself winning the gubernatorial races in 2014 and 2016. But with Republican opponent Glenn Youngkin skyrocketing to an 8% lead days before the election, the McAuliffe campaign has been struggling to stop the bleeding.

Terry McAuliffe is a bumbling fool who is completely out of touch with the people of Virginia. It appears he hires people who share his traits.